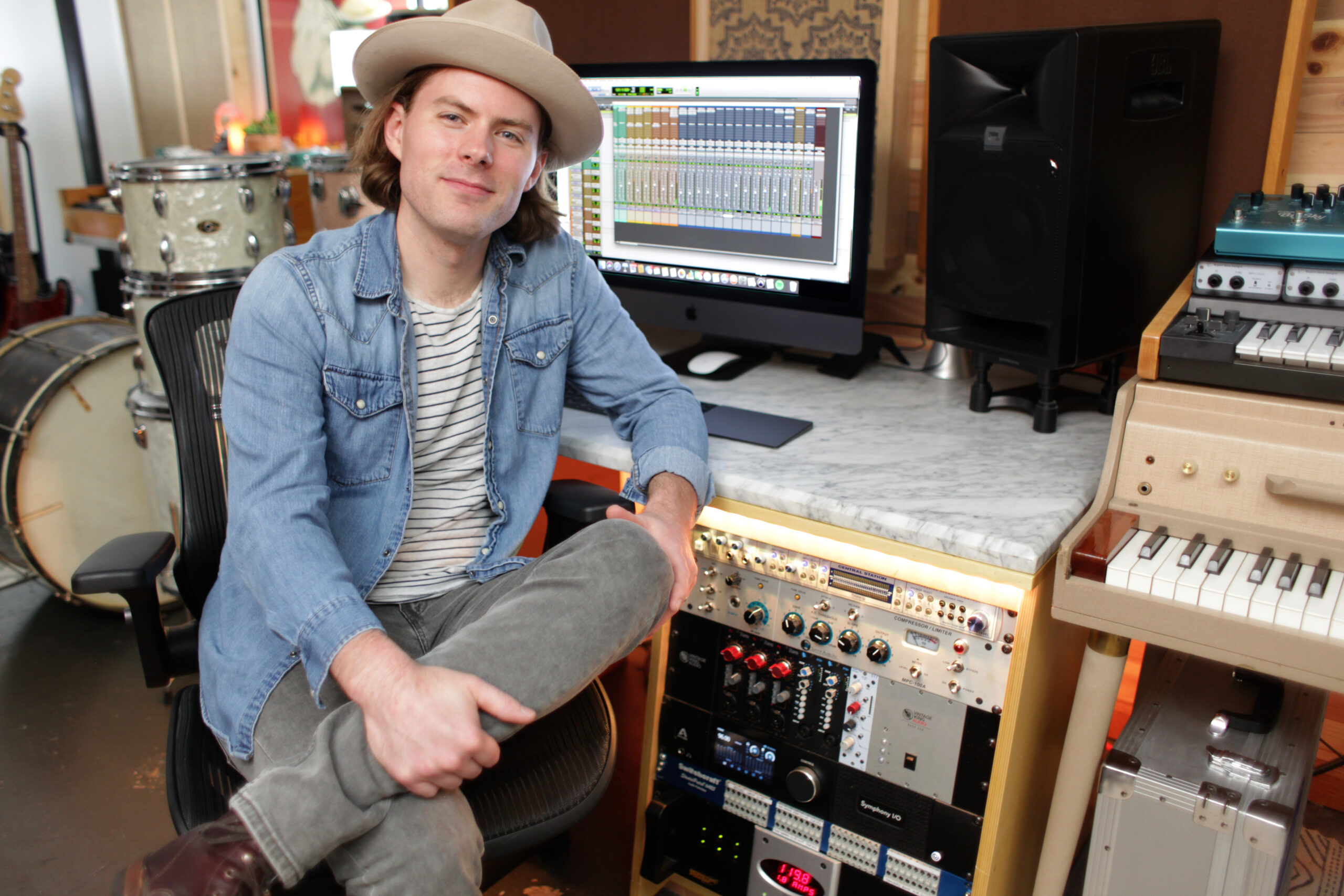 In a bid to capture the sonic characteristics that they admire in older records, US band The Well Pennies have supplemented their very modern workflow with Neve® 1073LB microphone preamplifiers, which are allowing them to embrace the warmth of classic analogue technology.

Bryan and Sarah Vanderpool, the husband and wife duo who make up this successful Folk/Pop duo, have now installed three 1073LB preamps into the fully stocked 500 Series rack at their studio in Des Moines. “A 1073LB preamp was one of the first things we bought for the studio when we moved back from Los Angeles,” Bryan Vanderpool says.

“We wanted the best and we knew we loved the Neve sound. There are so many copycats out there, but there’s nothing that sounds like an authentic Neve 1073®. These preamps help us get that warmth and harmonic drive that is missing from so many modern recordings. They can turn what would normally be a sterile recording into a rich and complex piece of art.”

Designed and manufactured in the UK by AMS Neve, the 1073LB retains the unique sonic characteristics of the original 1073® Classic microphone preamplifier, which celebrates its 50th anniversary this year. But while the architecture, matching components and original hand-wound transformers may be the same, the 1073LB delivers very modern advantages because it comes in the portable form now demanded by professional producers and engineers.

This critically acclaimed Folk/Pop duo The Well Pennines are delighted that the warmth and character of the Neve® units are helping them create ‘rich and complex’ art.

“Many of our favourite recordings were recorded with Neve gear or on Neve consoles, but it wasn’t until we got into the art and science of recording that we discovered the gear behind our favourite albums,” Bryan Vanderpool explains. “When we first became aware of the 1073®, we had no idea how iconic it was. We recorded our first EP with producer Michael Woodrum at his studio, and as he was cycling through preamps on Sarah’s vocals it was the 1073® that immediately jumped out at us. It had the exact characteristics we were looking for. When we started recording our own music, I called him up to talk about his gear and that was when we learned how influential and iconic the 1073® preamp is.”

Although they are now based in Iowa, Bryan and Sarah originally met in Boston while supporting each other’s solo sets in various clubs and venues. They fell in love and moved to Los Angeles where in 2011/12 they recorded and released their debut EP. They have subsequently released two albums – Endlings and Murmurations – that have been critically acclaimed for their soaring harmonies, pop melodies and lush string arrangements. In 2016, they relocated to Des Moines, which enabled them to set up Golden Bear Records, a studio and record label.

“We moved here with the sole purpose of building a recording studio away from the chaos of Los Angeles,” Bryan says. “We originally built the studio just for The Well Pennies, but Des Moines has such a vibrant art and music community that after a while our calendar started filling up with all sorts of local bands and songwriters. Today, whenever we’re not working on Well Pennies material, we’ve usually got some great local artist in here recording or mixing new music.”

Golden Bear Records (www.goldenbearrecords.com) has an extensive collection of vintage electric pianos and synths, a Hammond B3, a Yamaha U3, plenty of high-end guitars and banjos and several fully-restored vintage drum kits. Apogee Symphony Mk II are used for conversion and the studio has JBL 708P monitors.

“My workflow is a bit of a mix because I’m a control freak and don’t always like to commit to something right away,” Bryan explains. “My favourite way to work is to record through our preamps into our Apogee Symphony and then come back and use our compressor and reverb units after the fact. That way I can dial them in perfectly to the mix. But I also use quite a lot of plugins as well, it’s the golden age for home recording!”

Bryan adds that a key advantage of the Neve 1073 preamps is their ability to deliver a unique sound. “The real problem with modern workflows is that everyone is using the same plugins, the same preamp emulators and the same reverbs,” he says. “Everything sounds the same. Whenever we add a unique piece of analogue gear to the chain and use our real Neve preamps, it sets the sound apart and makes the recording sound unique (better). The 1073 units helped us sculpt our sound from the very beginning of The Well Pennies music.”

Like so many artists, Bryan and Sarah have been keeping themselves busy during the Covid-19 pandemic by working on material for a new album and recording inspiring cover songs for an EP. In his role as a producer, Bryan has also been mixing a new album from Ethridge Netz and will soon be recording a new project by the band Dear.

“Lockdown has been really odd, but luckily we’ve been staying busy with various remote mixing projects over the last few months,” he says. “It helps having our studio in our home. It made the lockdown really easy for us. Whenever we’re feeling inspired or have an idea, we can record at the drop of a hat (often in our PJs!). It will be really nice to have our band back together again in the same room, though.”

For more information about the Neve 1073LB Preamp, please get in touch with the AMS Neve team at info@ams-neve.com