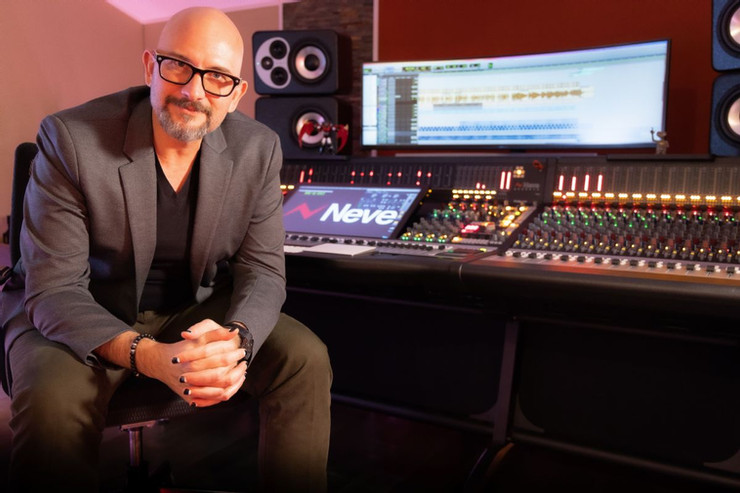 The renowned producer, composer and arranger is discovering so many benefits from working with AMS Neve technology that he has already expanded his console with additional channels.

You can never have too much of a good thing – this was the conclusion producer and composer Carlos Rodgarman reached after adding an eight-channel AMS Neve Genesys Black G16 to his private studio in Los Angeles.

Within months of installing the desk, Rodgarman was so impressed by its power, flexibility and the way it streamlined his workflow that he upgraded the console to a G48 by adding a 16 channel expansion module. He also took the opportunity to install the Neve GenesysControl Plugin and Neve 88R EQ hardware.

“To say I am blown away by this console is an understatement,” Rodgarman says. “The combination of Genesys Black and GenesysControl has completely revolutionised the way I work. I get all the benefits of Neve’s fabulous analogue EQ and dynamics without having to sacrifice any of the convenience of working ‘in the box’. It is transformative – just saying I have a Neve console is impressive because my clients understand the brand’s audio quality and pedigree.”

Originally from Spain, Rodgarman moved to America 18 years ago to pursue a career as a musician. As a talented pianist, he worked with many artists including Celine Dion, All – 4 – One, Prince Royce, Jonathan Butler, Sheila E, La India and many more. He is also in demand as a producer, arranger, musical director and programmer and now spends most of his time in the studio, where he has worked with artists such as Juan Gabriel, Beto Cuevas, Jenni Rivera, producer Humberto Gatica, Laura Bretan, Cristian Castro, Isabel Pantoja, Antonio Carmona and Oskar Cartay a, whose latest project was nominated for a Latin Grammy. Composing music for advertising agencies with partner David Weisberg and film and television projects is also slotted in around his music clients and his own projects, which he releases under the name of The RodgarBand.

Rodgarman’s studio, which is located in his Los Angeles home, is equipped with Barefoot stereo monitoring, Pro Tools and a host of vintage microphones, outboard equipment and instruments including a Yamaha C7 Grand Piano. The studio was recently extended to accommodate the Genesys Black G48 console and is now an acoustically accurate space with plenty of natural daylight.

“Sound quality really matters to me and this was the main reason why I chose a Neve Genesys Black console,” he explains. “The Neve sound is unmistakable and brings a new dimension to my work. The desk is also built to last and that was important as I was looking for reliability.”

Rodgarman adds that the modular nature of Genesys Black was also attractive because it allowed him to scope to expand in the future.

“What I didn’t realise was just how quickly I would want to do that.,” he says “As soon as I started using it, I got so much pleasure from tracking through the desk that I wanted to do more and more on it, which meant I needed extra channels. The addition of GenesysControl has also changed the way I work. I can now move seamlessly between Pro Tools or Logic and the console, and it is also much quicker to switch from project to project because sessions can be set up so easily by simply pushing a few buttons.”

A speedier workflow proved especially beneficial in the run-up to Christmas 2019 as Carlos Rodgarman was busy finishing a new album with Beto Cuevas, as well working on two major Christmas concerts that involved large orchestras.

“I’m hoping to have more time for my own projects next year,” he says. “I’m keen to develop a music library and there are also a couple of interesting film projects in the pipeline, which will keep my Neve Genesys Black console busy.”