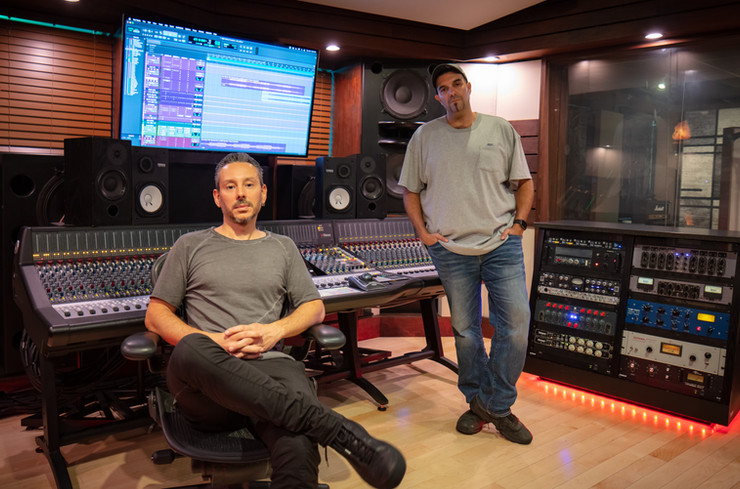 A burst pipe is not the kind of Christmas present anyone wants, but when New York’s famous Quad Studios suffered this fate at the end of 2020 the owners saw an opportunity to re-think one of their most iconic rooms.

Studio Q1 on the 10th floor of Quad’s Times Square premises was so badly affected by the flood that it had to be completely rebuilt. Until that point, it had been set up for a hybrid workflow with a digital control surface and 48 channels of analogue summing and preamps so that clients could choose between different sound colours and characters, depending on their project. But rather than rebuild it exactly as it was, Quad’s owners Ricky Hosn and Alessio Casalini decided to install a Neve Genesys Black GB64 console fully automatable via the GenesysControl Plugin.

This legendary New York studio complex has recovered from a disastrous flood by installing a Neve G64 Genesys Black console in one of its most iconic rooms.

“Considering the success of our original room we didn’t want to reinvent the wheel,” Ricky Hosn says. “However, we did address the limitations imposed by the size of the room because the Neve console allowed us to reduce the amount of outboard gear in Studio Q1, thus reducing the size of the racks. We were also able to elevate the audio quality of customers’ projects by giving them access to Neve’s classic analogue sound.”

For anyone involved in pro audio, Quad Studios needs no introduction. Located in the heart of Manhattan, it has been a vital part of New York’s music scene – particularly for the HipHop and Urban genres – since it was first established by Lou Gonzales in 1978. The studio definitely has a history. Not only have countless internationally acclaimed artists recorded at the facility, but Quad’s ground floor reception was also the location of an event that became part of HipHop history – the famous robbery of rapper Tupac Shakur in 1994.

Ricky Hosn became Quad’s owner in 2005 when Gonzales decided to retire. Dave Malekpour, President of Pro Audio Design Inc and Augspurger, was asked to liquidate the equipment, but instead, he approached Hosn, who was planning to build a studio in Florida, and suggested he buy the facility.

“I thought Quad was such a key facility in NYC that I didn’t want to see it closed down,” Malekpour says. “Ricky was immediately interested. When you can buy a good, existing facility it makes a lot of sense.”

Hosn adds: “2005 was a rough time for studios in the NYC market. Changes had to be made immediately to keep the studio relevant and operating at a high level. Some of the changes meant adapting to the digital trend and building new rooms designed to better fit modern-day workflows. The studio has gone through several transformations in the last 16-plus years and these changes have helped Quad stay dominant in the NYC market.”

Alessio Casalini, who became a partner in 2012, now handles the studio and technical side of the facility, leaving Hosn free to concentrate on business and administration. Quad now has three studios on the 10th and one on the 12th floor, which was opened in 2018. The 12th floor also features the 2500sq ft Quad Club, which is used for album release parties, writing camps, streaming events and much more.

“Since we have three other rooms based on the original Q1 hybrid concept, we thought why not go all the way with an analogue board?” Casalini says. “Most of our sessions require very fast recalls and workflow, so we wanted a desk that interacted as seamlessly as possible with the DAW and removed the need for manual recalls and complicated setups. We were looking for ease of use and quick changeovers and the Genesys Black was the perfect machine. Also, most of our outboard gear was severely damaged during the flood, so this was an opportunity to go in a different direction.”

Ricky Hosn was equally convinced by the Genesys Black, especially as he’d been following its progress since 2011 when Quad’s Q2 studio hosted some of the first US demo sessions for the new board. Impressed by its audio quality, intuitive automated DAW plug-in control and recall functions, he was quick to recognise its ability to satisfy those who want to work ‘in the box’ as well as those who prefer a more traditional analogue recording approach.

“Our rooms are designed to be very versatile and every studio can be used for mixing as a lot of today’s projects are done ‘in the box’,” he says. “The addition of the Neve to Studio Q1 will become a no brainer for anyone looking to get a better sound out of their mix and anyone looking to do serious tracking.”

Casalini adds that the size of Studio Q1’s live room makes it ideal for tracking sessions, especially as it will soon feature a new grand piano.

“That’s something we are looking forward to,” he says. “As for mixing, the Neve will definitely make a difference compared to our previous setup, and we still have a good amount of outboard gear for the engineers to choose from. Personally, my favourite feature of the new console is its interaction with Pro Tools. I like the Genesys Control plugin that you can insert into Pro Tools and control the EQ and compressors on the different channels. It’s very straightforward and easy to use – plus I’ve always liked the Neve sound.”

Putting a Genesys Black into Studio Q1 has given Quad the opportunity to rethink how it operates and how it pitches itself in today’s market. Both Casalini and Hosn feel it is a good addition to the studio and one that will open more possibilities by offering a wider choice of setups for clients.

“It’s all about differentiating yourself in the market,” Alessio adds. “Plus it will bring the famous Neve sound into the Hip Hop world!”

For information about the Genesys Black console, please get in touch with the AMS Neve team at info@ams-neve.com