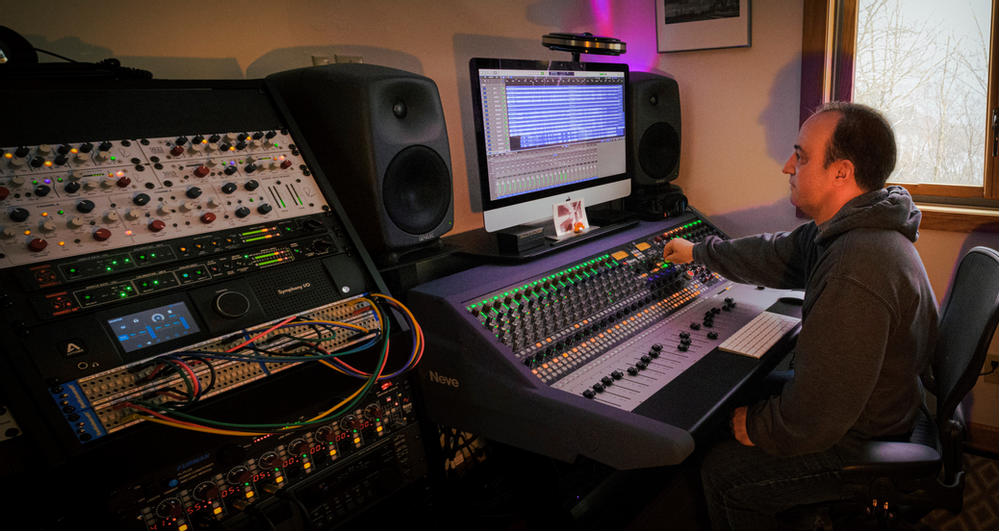 Independent artist and producer Thomas Statnick has installed a Neve 8424 console in his North Carolina studio because it allows him to maintain a familiar analogue workflow in a hybrid digital environment.

“I chose a Neve 8424 because I like using a large, fully featured console for tracking and mixing.”

“Given the substantial investment I have made over the years in outboard gear, going totally ‘in-the-box’ is not a practical option. What I wanted was a desk that could cope with a hybrid digital environment by delivering a low noise floor, high output levels and a high channel count for mix-down. Recall capability and the build and sound quality of the console were also important. The Neve 8424 meets all these criteria and also allows me to easily integrate my collection of classic analogue outboard gear into my workflow.”

Statnick’s studio is mainly used to record, mix and master projects for Anamorphic, the electronic/experimental ambient project that he established in 1996 with Elod Horvath. Originally built in Lafayette, Indiana, the studio then moved to New York City before finally relocating to the Blue Ridge Mountains in 2015.

“I perform all of the engineering, mixing, and mastering duties and assist in creating soundscapes and arrangements,” Statnick explains. “As an electronic music studio, we don’t feature a huge microphone or mic preamp collection, so our outboard gear is mostly comprised of compressors, equalizers, and effects units. We also have a 32×32 Apogee Symphony DAW interface and standalone A/D and D/A converters from Dangerous Music for mastering and monitoring.”

The studio’s new Neve 8424 was installed at the end of 2020 as a replacement for an in-line analogue console that was showing its age.

Based on the iconic 80-series console range, the Neve 8424 is a compact, budget-conscious desk that was specifically designed to fit the needs of the modern hybrid studio.

Both versatile and powerful, it provides a centralised platform with unparalleled connectivity, marrying Neve’s revered sonic excellence with the speed and flexibility required for today’s connected workflows.

“This is my first Neve purchase and although I have heard a lot of really great music produced on Neve consoles, this is the first time I’ve been directly exposed to the Neve sound,” Statnick says. “I have been an audiophile since my early 20s, and use a high-end audiophile system to proof masters and preview mixes. One of my biggest engineering interests in the studio is trying different things during mixing and mastering and listening to the result on an audiophile system. Sound quality and soundstage/imaging are extremely important to me, and Neve’s reputation for sound quality was definitely a factor in my decision to get an 8424.”

“I can flip between the two configurations with the touch of a button,” he says. “Channel, group, mix inserts and AUX send/returns are wired to a patch bay where I can patch any of my outboard gear into the audio path. As everything is balanced and switchable on the 8424, I can enable only the external paths I am using, so I can quickly A/B configurations and keep the noise floor to a minimum.”

Since installing the desk, Thomas Statnick has been recording and mixing tracks for Anamorphic’s seventh full-length release, which should be completed by the summer of 2021.

“The 8424 sounds awesome and brings an amazing amount of functionality and productivity in an intuitive and easy-to-use package.”

“I’ve also added an AMS RMX16 500 Digital Reverb Module to my arsenal of outboard effects and reverb units. I love its ease-of-use and simplistic controls, which allow you to dial-in just the sound treatment you want without a lot of menu hunting.”

For information about the Neve 8424, please get in touch with the AMS Neve team at info@ams-neve.com