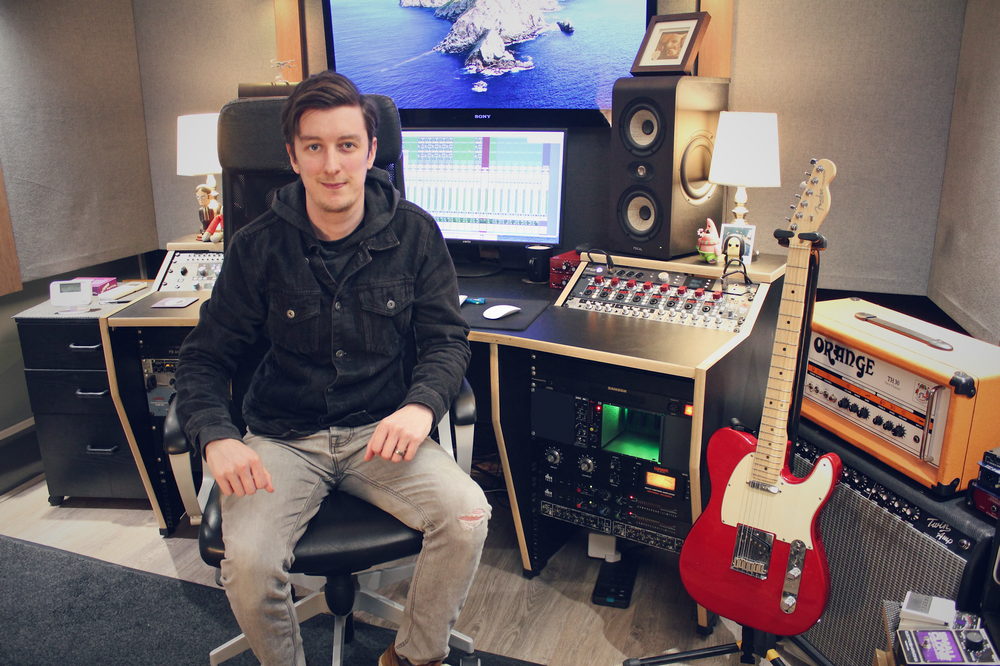 Producer/Songwriter Gareth Nuttall Streamlines his Workflow with a Neve 1073OPX

Producer/Songwriter Gareth Nuttall Streamlines his Workflow with a Neve 1073OPX

If there’s one thing that producer and songwriter Gareth Nuttall doesn’t like, it’s a faff. When he’s in the studio and the creative process is going well, he doesn’t want anything holding him up.

To this end, he recently changed his workflow so that he could encompass a more streamlined approach. His new style of working also resulted in some equipment changes at his studio in Wigan. Out went his console and in its place came a Neve 1073OPX Octal Microphone/ Line/Instrument Preamplifier, which is specifically designed to meet the needs of a modern studio environment like Gareth’s.

“The changes I have made have given me a much easier workflow, and key to this is the 1073OPX, which is now my workhorse because everything goes through it and I almost treat it like I’m running a mini Neve console,” Gareth explains.

“I used to track and partially mix on a console, but when I started to do more producing and had to do some sessions in different environments, I found that style of working to be quite restrictive because it didn’t allow me to do what I wanted straight away. I’m now running some outboard on the way into Pro Tools as I like to try and capture high-quality source audio on the way in and then leave it there. Apart from bits of re-amping, I’m now mixing completely ‘in the box’ – I even swapped over to a MacBook so that I can do my mix prep and editing at home.”

A graduate of Manchester’s School of Sound Recording, Gareth began playing the guitar at a young age but soon realised his passion lay in music production, so he started buying recording equipment and setting up a home studio in his parent’s conservatory. After university, he turned the disappointment of not being able to find a full-time studio job into a positive by establishing his own facility, The Lounge Recording Studio, which opened its doors in 2011.

“I built a portfolio by recording local bands and friends’ bands for free and it all took off from there,” Gareth says. Since then the studio has attracted a huge range of artists including The Lottery Winners, The K’s, Frank Turner, Stanleys, The AV Club, Ravellas, Pink Shirts For Pale People, Shallow Water, Gary Quinn, and The Jade Assembly, as well as undertaking countless projects that have gone on to achieve Top Ten places in various industry charts.

“When I’m in the studio I like to dive right into the creative aspects and not kill the mood by having to spend a couple of hours tuning vocals or editing drums,” Gareth explains. “I’m now currently running 8 channels of Neve front end with the 1073 OPX, an Audient asp800 for an extra chunk of inputs, and a couple of extra pre-amps, all plumbed into an Antelope Orion, which I use for my conversion and monitor control. I also have a few outboard compressors and a couple of hardware EQs and FX racks so that I can mould the source on the way in when needed. The only time anything goes through any pre other than the 1073OPX is when I run out of Neve channels, so I’m probably going to need another OPX at some point!”

Neve’s 1073OPX delivers the same unique tonal quality, warmth, low-mid punch and subtle harmonic distortion as the company’s iconic 1073 mic preamp. Updated for today’s workflow, it packs eight legendary 1073® remote-controlled preamps with Marinair® transformers into a 2U rack unit and has front and rear connectors for comprehensive connectivity. Modern remote-control software ensures two-way control with Total Recall™ of all settings, while the analogue and digital monitor signal path allow it to be used as a complete standalone I/O interface or as a latency-free live room remote preamp.

For Gareth, it was the legendary Neve sound that attracted him to the 1073OPX. He wanted something with character and knew that it would be sonically perfect, as well as being a really useful addition to his new streamlined studio.

“The 1073OPX gives me all the colour and texture I need in my mix, right from the source, and it sounds incredible,” he says. “I feel like I’m doing much less fighting in the mix and things are just sitting better right away. The fact that it’s 8 channels in one unit is also amazing. It was so easy to just drop right into my setup and get going instantly.”

He adds that another major bonus is having inputs on the front of the unit, as well as the back.

“The ability to just plug right in, in the control room, for various scenarios without faffing around routing the unit to patch bays, etc is so handy, especially for things like Bass,” he says. “You just plug into the DI and off you go – and the DI sounds so good on bass, by the way! For me, the unit has been a game-changer and it’s definitely taken my productions up several levels.”

Owning a piece of Neve equipment is still the dream for many aspiring recording professionals and Gareth Nuttall was no exception. Although he’s owned Neve clones in the past (and has apologised profusely!), the 1073OPX is the first piece of genuine Neve equipment that he has bought for his studio.

“There’s no going back now, that’s for sure!” he says. “Everyone knows what Neve means to audio and this unit does all the things you’d expect from it. Every source I’ve thrown at it sounds better, right off the bat, and in terms of production quality it is built like a tank.

“I’ve also been so impressed with the help I’ve received from everyone at Neve. They have gone out of their way to answer my questions about the unit and when it came to ordering, the service was really quick.”

For more information about Gareth Nuttall and The Lounge, please visit: www.theloungerecordingstudios.co.uk

To learn more about the 1073OPX, please get in touch with the AMS Neve team at info@ams-neve.com