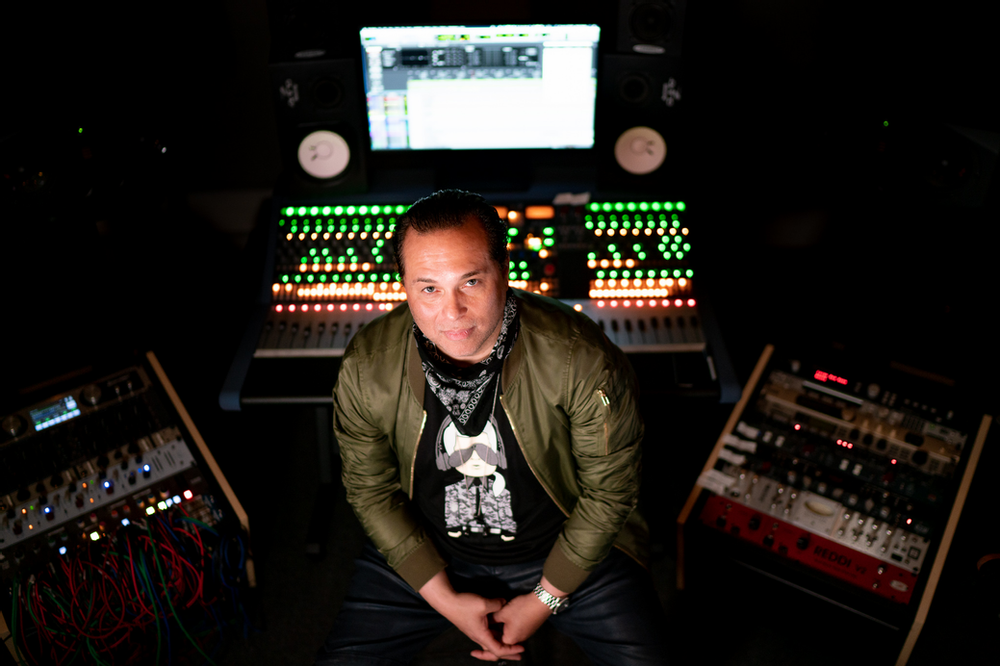 Kevin Teasley Speeds up his Workflow with a Neve 8424 Console

Kevin Teasley Speeds up his Workflow with a Neve 8424 Console

“No helicopter needed,” laughed Kevin Teasley when he was asked about the arrival of his new Neve 8424 console. “It came from the UK by ship, then was brought by truck to my studio at United Recording Studios on the Sunset & Gower lot. It fit right through the front door so we just rolled it in. We set up the stand, unboxed it and there it was, all ready to be patched in. It couldn’t have been easier, the whole unboxing to setting up took about an hour.”

Since then, this prolific and internationally acclaimed composer, programmer, sound designer, music producer and musical director has been putting the console through its paces on a number of projects for very high profile clients.

“We started with the live arrangement and production music mix for Coi Leray’s performance on The Tonight Show starring Jimmy Fallon on NBC,” Kevin says. “This was pre-recorded and we also put the TV broadcast mix through the 8424. Then it was utilized for Jennifer Lopez’s performance with Saweetie on Global Citizen 2021, which was broadcast on all major networks and YouTube. We handled music production and created final stem mixes for the TV broadcast mix, which worked out very well and was an amazing use for this console. It has also been used for our own internal projects such as film and TV trailers and commercials.”

His decision to invest in a Neve 8424 console stems from a genuine love of the classic Neve sound, which is ably represented by this small format console because it is based on Neve’s iconic 80-series console range.

“Who doesn’t love Neve pre’s and EQs,” he says, “especially for orchestral work and film and TV scoring. I have tons of outboard gear, including quite a lot of Neve equipment, so I wanted a desk that was cost effective and offered a hybrid solution so that I could easily integrate into my pre-existing studio set up with all of my outboard gear.

This desk gives me the feel and workflow of a large console but with a much smaller footprint. I don’t necessarily need a channel strip on every channel, but what I do need is speed of use, especially when I am shuffling between projects. I tend to start with some plug in processing ‘in the box’, then route that out of Pro Tools onto a channel or fader so that I can add outboard processing on the insert. This gives me a truly great blend between the digital plug in world and the analogue world. I can do much more with parallel processing because I don’t have to worry about latency issues.”

Alongside its connectivity, Kevin is also a fan of the 8424’s on-board Recall system, which further integrates the console into the modern hybrid studio workflow. This unique feature enables this pure analogue console to save, load, and recall all settings, faders and pot positions for on a session by session basis.

“The routing on this console is very flexible, and I love that,” Kevin says. “When you are working on TV and film cues or music projects for artists, the track count and the amount of hardware you are using can get pretty high, so being able to direct out and print back in, all at the same time, saves a lot of time. This desk gives you a large console workflow and sound, while still allowing you all the advantages of plug ins and working ‘in the box’. We all know that doing cue mixes in a DAW is cumbersome brings latency issues with it, but on this console it is extremely simple to set up a cue mix because the cue mix function is already dedicated and built in. You can cue send, keep it latency free, add reverb and delay and listen to other mixes back and forth without having to worry about anything.”

Easy integration is a main selling point of the 8424 – and one of the features that immediately attracted Kevin Teasley to this desk because it removed the need for a lot of patching.

“We have 32 channels hardwired out from the audio interface and going straight into the console, so no patchbay is required for that,” he explains. “The direct outs on the console go straight back into my inputs on the DAW, which also removes the need for a patchbay – and for a lot of additional cabling. Off the bat this desk eliminated 64 patchbay points, which is amazing.”

Working in film and TV is very different from straight music recording because the need for speed is so much greater. Kevin believes that saving time is one of the biggest changes the 8424 has made to his workflow, and this in turn allows him to be more creative.

“Trying to achieve the width, depth, transformer sound and accumulation of analogue love that you get from a console is much more challenging when you are working with plug ins and a DAW,” he explains

“The 8424 enables me to get to the sound I hear in my head much faster – and therefore work more efficiently because I’m already starting off on the right path. I can be creative from the onset and sculpt from there. When you combine this with the ease of patching in outboard and signal processing, things really speed up.

AMS Neve is planning to launch flying fader automation for the 8424 and Kevin Teasley says he is very excited about this because it will make the desk even more like a large format console. He is also planning to invest in a Neve 1073OPX Octal Microphone/Line/Instrument Preamplifier, which delivers the same tonal quality, warmth, low-mid punch and subtle harmonic distortion as the company’s iconic 1073 mic preamp but has been updated for today’s workflow with modern, remote control software and Total Recall™ of all settings.

“The Neve 8424 has already been a game changer as far as I am concerned and I’m really happy with it,” he says. “At this price point and offering this kind of versatility, it is the perfect console for people who have a lot of outboard gear and don’t want to deal with redundancy.”